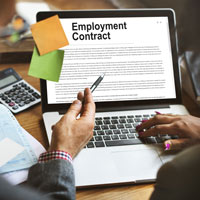 Legislation sponsored by Democratic Assemblyman, Andrew Zwicker and Gordon Johnson would establish additional protections for freelance workers in New Jersey. An estimated 600,000 New Jersey residents currently work on a freelance basis, and that number is expected to increase as technology changes the way we work. Freelancers contribute $30 billion to the state economy.

The Assembly Appropriations Committee approved the measure, which is designed to ensure freelancers are treated fairly and receive compensation in a timely manner. It requires written contracts between companies and freelance workers, with penalties for employers if compensation greater than $600 is not paid within 30 days.

The legislation also requires companies that hire freelance workers to keep the contracts on file for at least six years. The state Department of Labor and Workforce Development would serve as the regulatory agency for freelance workers and have the right to view contracts upon request.

Like other New Jersey legislation aimed to protect workers, the bill includes a strong anti-retaliation provision that makes it unlawful for employers to threaten, intimidate, discipline, harass, deny a work opportunity to, discriminate, or take other action that is reasonably likely to deter the freelance worker from exercising their rights under the bill.

A freelance worker may file a claim with the Commission of the New Jersey Labor and Workforce, which can bring action on behalf of the worker. Alternatively, a freelance worker can file a private lawsuit, and if the employer is found liable, the employer may have to pay the amount of compensation owed, and an additional penalty known as liquidated damages.

A knowing violation of the bill may result in significant penalties. First offenses would be deemed a disorderly persons offense, which carries fines up to $1,000. All offenses after the first one would be a crime of the fourth degree, which is punishable with fines up to $10,000.

Exemptions to the Bill

Some professions would not be considered freelancers and are exempt from the proposed legislation. These include those practicing law, some contracted sales representatives for manufacturers, licensed medical professionals, licensees of the New Jersey Real Estate Commission, and anyone subject to a collective bargaining agreement that gives specific wages and conditions of employment.

Further, the new bill will require the Department of Labor and Workforce Development to create a program to assist freelancers, providing information about acquiring legal representation and other assistance via phone or email.

In addition to New Jersey, other states are beginning to enact legislation aimed at protecting freelance workers. In 2017, New York City became the first in the nation to enact legislation that specifically protects freelancers. According to city officials, it has already helped save workers more than $250,000 in lost wages.

The New York based Freelancers Union estimates that freelancers are more than one-third of the nation’s workforce, due to the rise of companies like Uber and Lyft, which use independent contractors instead of traditional employees. Other industries making more use of independent contractors include tech, entertainment, graphic design, business consulting, and finance.

The Department of Community Affairs states that they have fielded over 260 complaints from freelancers since the protections were implemented. New York City officials state that most of the complaints regarding payment violations did not require a court order for payment recuperation, and 90 percent received the total amount owed to them.

If you are an employer who is unsure about employee classifications, or if you are a freelancer or independent contractor who needs legal advice in a wage or contract dispute, the dedicated Atlantic County employment lawyers at Levine, Staller, Sklar, Chan & Brown, P.A. will fight for the justice and the compensation you deserve. Call 609-348-1300 today or contact us online to schedule a consultation in our Atlantic City offices. We proudly represent clients across the state of New Jersey, including those in Atlantic County, Ocean County, and Cape May County.