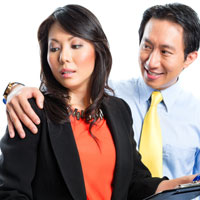 In yet another #MeToo moment, Jeff Fager, the executive producer of CBS’s news program, 60 Minutes, has officially left the network. This action followed articles written in The New Yorker, which included accusations of Fager inappropriately touching employees, and a report by The Washington Post, who shared that a senior producer alleged that Fager tolerated years of abusive conduct.

CBS News President, David Rhodes, explained that Fager was let go because he violated company policy and that CBS is committed to upholding its policies. However, he did not specify as to which policy was violated. He went on to state that Fager was not let go because of the recent sexual harassment allegations, but rather because of the policy violations alone. Fager denied all allegations in The New Yorker.

According to Fager, his termination from the station came about for a completely different reason. He claims that he was let go prior to the end of his contract when the allegations emerged that he had been engaged in sexually harassing employees. He states that he contacted a reporter via a strongly worded text message that demanded she cover the story fairly. Fager’s text message read in part “If you repeat these false accusations without any of your own reporting to back them up you will be held responsible for harming me.”

After 36 years with the network, he believes that it should not have led to his termination from the network.

In July, several former CBS employees told The New Yorker that the producer, on multiple occasions, had consumed alcohol at work-related events before touching them in ways that made them feel uncomfortable. Fager again denied the allegations. Another allegation claimed that he enabled a corporate culture that protected bad behavior.

Not the Only CBS Employee to Face Termination

Unfortunately, Fager is not the only CBS employee to receive attention for allegations of sexual misconduct. Just days prior to Fager’s termination, the CBS chairman and CEO resigned after similar allegations against him surfaced. Last year, the host of CBS This Morning was terminated after he was accused of inappropriate behavior by more than 24 women.

If you believe that you have been the victim of sexual harassment in the workplace, you have every right to stand up for yourself. At Levine, Staller, Sklar, Chan & Brown, P.A., our Atlantic City sexual harassment lawyers serve individuals in all matters of employment law. With an office centrally located in Atlantic City, New Jersey, we serve clients from Atlantic County, Ocean County, and Cape May County. To schedule a consultation, call us at 609-348-1300 today or contact us online.