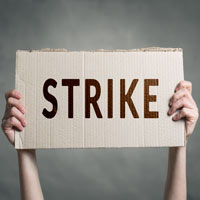 Workers on strike against employers that have violated contract or collective bargaining terms can collect unemployment insurance benefits after a 30-day waiting period. Specifically, the bill amends the New Jersey unemployment insurance law and provides that (1) if a labor dispute is caused by an employer’s failure or refusal to comply with an agreement, contract, or collective bargaining agreement concerning hours, wages, and other working conditions, and (2) if unemployment is caused by such a labor dispute through a strike or other concerted employee activity, the striking employee is entitled to unemployment benefits after a 30-day waiting period.

The proposed law was previously vetoed by former Governor Chris Christie in 2016.The initial proposal for the bill was initiated by legislators in 2016, after 40,000 Verizon employees endured a six-week strike protesting contract stipulations. Of those on strike, 4,600 were New Jersey employees. Workers felt the sting of lost wages during that six-week period, which prompted New Jersey lawmakers to propose the bill that would allow striking workers to collect unemployment benefits.

Currently, Governor Murphy is actively working to reverse many of his predecessor’s labor laws and policies, is a strong advocate for collective bargaining rights, and has signed several employee friendly laws, including the Sick Leave Act, and the Equal Pay Act.

Under the new law, employees who are replaced by permanent workers during a strike, or are not allowed to return to work after a strike, can collect unemployment benefits for the 30-day waiting period required by the law.

Benefits will be immediately available to those employees that are permanently replaced and can be recovered by those who are not permitted to return to work once the strike has ended.

Governor Murphy went a step further in the legislation by imposing a fine of $750 that will be paid by the employer to the unemployment insurance fund for each employee that is permanently replaced during a strike or is not permitted to return to work following a strike. Governor Murphy intends to send a clear message to employers that he is out to protect the rights of New Jersey workers by providing crucial pay to those out of work during a strike.

If you believe you or someone you know has been a victim of injustice by an employer, the experienced team of Atlantic City employment lawyers at Levine, Staller, Sklar, Chan & Brown, P.A. can help. Call us with all your employment law needs at 609-348-1300 or contact us online to schedule a consultation today. Our offices are in Atlantic City, New Jersey, and we serve clients throughout Atlantic County and the state.