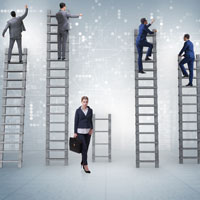 The #MeToo movement, and New Jersey’s Equal Pay Act, have brought gender inequality in the workplace to the forefront. However, new allegations brought against Nike have demonstrated that the fight for gender equality remains far from over. Recently, Nike has been hit with a lawsuit brought by former employees, claiming that the athletics company pays and promotes women less than their male counterparts.

A class-action lawsuit was filed in a U.S. District Court in Portland, Oregon by four former Nike employees who alleged that they endured a hostile work environment, were paid less, and had fewer opportunities for growth than their male colleagues, regardless of their comparable performances.

The class-action lawsuit also explained that women face blunted career trajectories due to gender marginalization. The suit asserts that Nike judged women on a much harsher basis than their male colleagues. This means that they received lower salaries, smaller bonuses, and fewer stock options. The complaint also states that males who behaved poorly were rarely held accountable or penalized.

The suit also includes accusations that the company failed to address allegations of sexual harassment, among other complaints from female employees. Since the filing, Nike has made a statement expressing its commitment to diversity and inclusion, as well as its opposition to discrimination of any type. The company also expressed that it is committed to competitive pay and benefits for all employees.

A History of Discrimination Allegations

This is not the first time that Nike has faced claims of promoting an unfair environment. Individuals have previously accused the corporation of maintaining a hostile and demeaning environment for women. In March, the brand saw the resignation of their brand president, along with the company’s vice president and general manager of global categories. The company chairman and CEO explained that they left due to behavioral issues that were not consistent with the company’s values.

Last month, Nike announced that it would raise the pay for 10 percent of its staff across the board. They also expressed plans to change the way in which bonuses are assigned. Citing an internal memo, CNBC stated that the salary hikes were designed so that individuals who are responsible for the same jobs would be paid equally.

Aside from seeking damages and asking for the reinstatement of women who had experienced discrimination to their rightful positions, the suit also asks for a court order that mandates the creation and implementation of reliable standards when assessing employee performance, as well as when they are deserving of promotions.

If you have been the victim of gender discrimination in the workplace, it is important that someone fights for your rights. The Cape May County gender discrimination lawyers at Levine, Staller, Sklar, Chan & Brown, P.A. are here to help. Contact us online today or call us at 609-348-1300 for an initial consultation. Centrally located in Atlantic City, New Jersey, we serve clients from the surrounding areas, including Ocean County, Atlantic County, and Cape May County.