The State Police had assigned a team of female troopers to go undercover as sex workers and infiltrate the city’s prevalent sex trade industry.

The four-day operation in May 2011 netted the arrests of several prostitutes and their pimps.

The prostitution bust and its aftermath ended her rocky marriage to another state trooper, upended her career, led to a death threat against a colleague, and resulted in internal affairs investigations, criminal probes and costly lawsuits that continue now more than four years later.

Sirakides’ lawsuit — details of which are being reported for the first time by MyCentralJersey.com — threatens to become another blemish on the State Police, which is struggling to diversify its ranks with more minority and female troopers and earn the trust of the state’s minority communities.

Her lawsuit is among at least a dozen filed by female troopers against the State Police in the last 15 years, all alleging sexual harassment or discrimination in a white male-dominated environment.

Sirakides wasn’t the only trooper subjected to the scurrilous backbiting by colleagues after the sex sting, according to the lawsuit.

Kenneth Franco, a detective sergeant first class who oversaw the prostitution detail, was rumored to have had sex with Sirakides. One such story passed around troopers, Franco says, had him locking the female troopers in a hotel room, getting them drunk and “almost… raping them.”

And then, Franco says, he was threatened with murder.

At the time of the prostitution sting, Sirakides was separated from her husband, also a state trooper assigned to the Technical Emergency and Mission Specialists – the State Police version of a SWAT.

Sirakides believes her husband began spreading the rumors about her and Franco. Troopers in the TEAMS believed the tales and didn’t take kindly to what they heard. 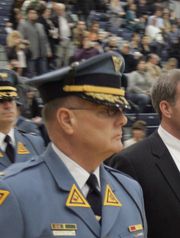 When a TEAMS member heard about the alleged affair and reported it to his superior, Franco says, Capt. Daniel Mitten reportedly responded: “Nobody messes with a TEAMS member’s wife.”

After another trooper had heard the rumors, he reportedly went up Franco and said: “You better be careful, or you’re going to get a sniper bullet in the back of your head.”

Franco has joined Sirakides in suing the State Police.

Their lawsuits reflect on the integrity of police internal affairs units, which are tasked with investigating alleged wrongdoing by their own colleagues.

After complaining to superiors about their treatment, both found themselves the targets of criminal and internal investigations.

This year, both were placed on indefinite unpaid suspensions and could be fired if they lose a court challenge to their discipline.

Authorities accused Sirakides of hacking into her ex-husband’s email. Sirakides said it was joint account she held with her husband. After she discovered that it had been used to send two anonymous letters to superiors alleging an affair between Sirakides and Franco, she turned the emails over to the Attorney General’s Office. Her husband then reported her as a “hacker” to the State Police.

Franco, meanwhile, was pinned with leaking embarrassing photos to the press in 2012 depicting Sirakides’ husband and other troopers waving a Puerto Rican flag over a mound of confiscated drugs. The photos outraged Latino community leaders and State Police officials promised a thorough investigation.

Franco’s attorney, David John Azotea, of Levine Staller in Atlantic City, said Thursday his client did not release the photos and is challenging the charges in Superior Court.

It is not clear if any troopers other than Franco have been disciplined for the photos. A State Police spokesman last week did not answer questions about the photo investigation or the litigation.

The Attorney General’s Office, which is representing the State Police in the litigation, has denied the lawsuits’ accusations in court filings. 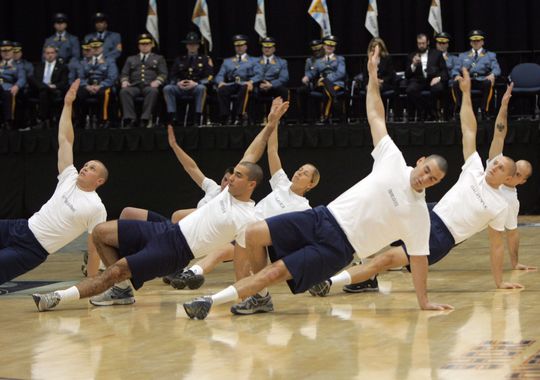 Troopers demonstrate their fitness at a graduation ceremony. (Photo: ~File)

“The State Police has targeted them as wrongdoers and they are simply not,” said Azotea, who also represents Sirakides. “They are decorated Troopers with great personnel files and commendations, and both continued to make their way up in the ranks.”

“Biased internal affairs investigations are a matter of public import as [they] impact not only plaintiff but the thousands of employees employed by the New Jersey State Police and the public at large,” her court filing says.

The lawsuit says investigators took the side of her husband, who as a TEAMS members, was part of group that had “de facto special status” with preferential hours and treatment.

Internal Affairs Lt. Vincent Parenti tried to sabotage the investigation, her lawsuit says, and tried to convince her to drop her sexual harassment complaint or else she could “get suspended or lose her job.”

The sexist, abusive treatment even extended to the police union, she says. In 2012, union representative James Gaffigan told Franco that Sirakides had a reputation as a “loose girl” and that she “couldn’t act like a whore and then try to get a pay day,” the lawsuit says.

When she complained about Lt. Brian Slattery making sexual comments to her and calling her “baby,” “baby cakes” and “baby doll,” nothing was done, she said, other than that she was told that superiors no longer wanted her on undercover sex crime details.

When she took part of an employee counseling program, director James Nestor told her “this is the State Police” and she had to “deal with” the hostility; accused her being “an insecure girl” and that she “needed to get laid;” he urged her to reconcile with her husband and said that troopers had “freedom of speech” to say what they wanted about her.

Franco, who joined the State Police in 1993, claims he never attended sexual harassment training or was asked to do so by his superiors.

Jones did not immediately respond to a follow-up question asking whether this policy was in place before 2012, the years Franco and Sirakides filed their lawsuits.

At least a dozen female troopers have sued the State Police in the last 15 years. (Photo: ~File)

Women in the State Police: 2014 statistics