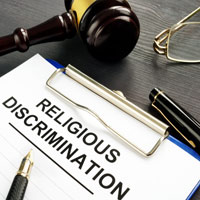 A Jewish teacher employed by a Catholic high school in the Archdiocese of Newark, New Jersey has filed a religious discrimination suit claiming he was the victim of anti-Semitism, retaliation, and a hostile work environment. In the lawsuit, the plaintiff claims that he was forced to look at a swastika that was carved on the blackboard in the classroom where he taught, endured discriminating insults from students, and suffered unlawful retaliation when he reported the discrimination.

The Civil Rights Act of 1964 makes it illegal to discriminate against someone on the basis of religious affiliation. The New Jersey Law Against Discrimination (LAD) likewise prohibits religious discrimination. However, according to the school, the plaintiff in this case only claimed that his civil rights were violated after he received a poor evaluation from the school’s administration.

The plaintiff claims that the poor evaluation was part of the religious discrimination that he endured, because administrators chose to observe him during a test review. The teacher also claims he was given teaching tools far inferior to those offered to other teachers at the school.

Claims of Religious Discrimination at the School

In the lawsuit, the plaintiff describes how the students at the all-boy Catholic high school consistently made discriminatory remarks about his religious affiliation, and threw coins at him when his back was turned in reference to a Jewish stereotype. He also stated that one of the students acted out a scene from the movie Schindler’s List, where a Jewish woman was murdered for her religious beliefs.

Another student wrote a message on his desk in German that translated to, “six million was just the beginning.” This comment was in reference to the number of Jews killed by the Nazis during World War II. The swastika that was carved on the blackboard in the classroom where the plaintiff taught was eventually removed, but not until almost the last month of school.

The School’s Response to Allegations

During the evaluation, the teacher was preparing students for a test that would be taken the next day. The evaluator gave the performance a poor review, citing the teacher did not actively engage with the students during the lesson.

The teacher responded to the evaluation with claims of religious discrimination and reports of anti-Semitic behavior from his students. The principal of the high school responded by saying the behavior of the students was a direct response for the teacher’s lack of classroom control. The school then informed the teacher that he would not be offered employment the following school year, though at a far earlier date than the norm.

The plaintiff is seeking a jury trial and compensatory and punitive damages for the emotional distress he endured, and for reimbursement of attorney fees and court costs. There is currently no date set for the trial.

If you believe that you or someone you know has been a victim of religious or other employment discrimination, the Atlantic City employment discrimination lawyers at Levine, Staller, Sklar, Chan & Brown, P.A. can help you claim the justice you deserve. Call us at 609-348-1300 or contact us online to schedule a consultation today. Our Atlantic City, New Jersey offices serve clients throughout Atlantic County, Ocean County, and Cape May County.